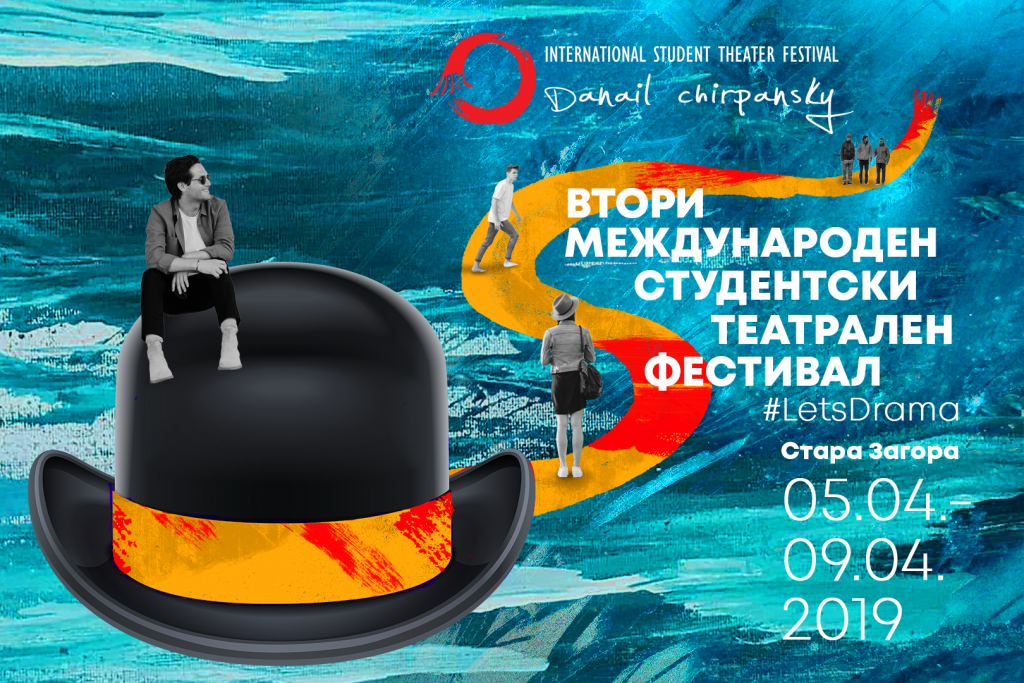 Stara Zagora will once again be the centre of European theatre during the second edition of  International Youth Student Festival “Danail Chirpansky” in Stara Zagora, taking place between 5th and 9th of April.

The Festival was created in memory of a dear friend and colleague – Danail Zhelev – Chirpansky – who passed away tragically after a car accident in 2016. His devotion and dedication to theatre inspired the festival team. Dani and his dream laid the beginning of a tradition, whose goal is to help other talented young artists bravely walk the path to their self-fulfillment.

This year the Festival will offer its audience exciting and interesting performances. The organisers have prepared a rich accompanying programme. The Opening Ceremony will be free to attend and will take place on 5th April at 6pm at Drama Theatre Geo Milev Stara Zagora with special guest performance of  “The King Stag” by Azaryan Theatre, Sofia.

The group from The Faculty of Drama Arts at the University of St Cyril and Methodius, Skopje, Macedonia will open the main programme on 6th April at 4.30pm at Drama Theatre Geo Milev. The play “Who the fuck started all of this?” is by Dejan Dukovski, who was part of the jury during the first edition of the festival.

On the same day at 7.30pm at State Puppet Theatre Stara Zagora the The Polish National Film, Television and Theatre School in Lodz will present the play “Feaver” which explores modern society, deprived of human values, lost staring at their TV and phone screen.

On 7th April, 3pm in Peti Oktomvri Park, the play “The Concert of the Puppers” by Male Male Theatre, Sofia will be enjoyed by children and grown-ups. The play will be free – in case of bad weather, an alternative location will be announced with plenty of notice.

Participants from the Russian Institute for Theatre Art (GITIS) will present to the Bulgarian audience the play “Money to Burn” by A. N. Ostrovsky – a classical piece, exploring the materialism of modern society. The Russian Academy will perform in Bulgaria twice. Just before the Festival, on 4th April, at 7pm, “Money to Burn” will be performed at NATFA Theater in Sofia. In Stara Zagora the performance will be held on 7th April at 5pm at Drama Theatre Geo Milev.

On Sunday, 7th April at 9.30pm, visitors of Drama Theatre Geo Milev will also have the opportunity to enjoy “The Copla Cabaret”, a special guest in the festival program, coming from the UK. Visitors to the first edition of the festival would remember Alejandro Postigo with his own performance “The Copla Musical” – winner of the award for Mastery of Musical and The Personal Approach Towards it.

On 8th April at 5pm, the visitors of Drama Theatre Geo Milev will enjoy the performance of NAFTA Krastyo Sarafov – “Suitcase Packers” by Hanoch Levin – a piece which tells us of a life spent longing for something better.

Participants from the Theatre Department at the University of Tel Aviv, Israel, will also present a graduation performance by Hanoch Levin. You will be able to see the play “Murder”, which shows the eternal paradox of war and hatred amongst different cultures, on 8th April, 8pm at State Puppet Theatre Stara Zagora.

England’s second performance is a musical created especially for the festival. Alejandro Postigo, now part of the teaching staff at The College of Music, University of West of London, who we know from the first edition of the festival, created the play “History of Violence”.

The Closing Ceremony will also be open to free entry and will take place on 9th April at 8pm at Drama Theatre Geo Milev.

All performances, unless else specified, will ask for a donation of 5lv, which would guarantee visitors a guest pass with an allocated seat. Donations are accepted at the boxoffice of Drama Theatre Geo Milev and State Puppet Theatre, Stara Zagora, between 4th and 9th April. All donations will contribute to the development of the festival. All performances will be accompanied by English subtitles.