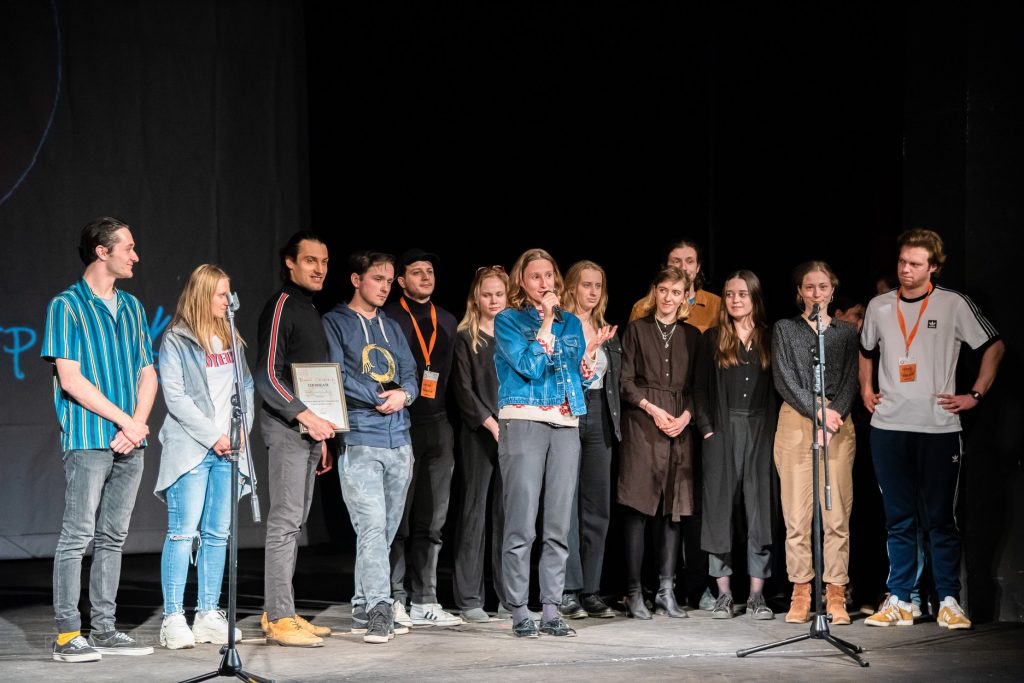 The class of Prof. Atanas Atanassov from NATFA “Krastyo Sarafov” and the show “Suitcase packers” won the grand prix at the second edition of the “ Danail Chirpansky International Student Theater Festival”, which took place in Stara Zagora from 5th to 9th of April. The american-russian drama specialist and translator John Friedman, the french director Thierry Harcourt and the bulgarian director Yavor Gardev awarded with special awards and the other participants of the festival.

The jury decided that the performance “Money to burn” of Russian Academy of Theatre Arts (GITIS) receives a prize for adaptation of classical russian drama at contemporary context. The Faculty of Dramatic Arts at the University “St. St. Cyril and Methodius”, Macedonia, and their performance “Who the fuck started all this” was awarded with a special prize for creating a theatre space beyond time. The performance “Murder” from the Theatre Department of Tel Aviv University, Israel, received a prize for the courage to express a strong a moral position from the stage. The students from the Polish University for Cinema, Television and Theater in Lodz and the performance “Fever” received a prize for their ability to work as a group without losing their individuality and for their musical skills.

The Honorary diploma and a statuette for special participation were received by the UK guests – Alejandro Postigo for the spectacle “The Copla Cabaret” and the students from the London Musical College for the musical“History of Violence “. The task of the jury was not easy because all the performances were very different.

A few seconds before announcing the big winner, Thierry Harcourt shared from the closing stage of the festival: “We want to thank every single person here. It was really interesting to be on the side of the audience. It was really great to see your energy, passion, your desire to be on the stage and at the same time the human side of each one of you, which is fantastic.”

This year at the ISTF “Danail Chirpansky” was established a very special and significant prize awarded by the head of Shakespeare’s Theatrical School “Petrovden” Inna Tserovska. For 11 years in the village of Patalenitsa, Bulgaria, the Shakespeare School, created by director Hristo Tserovski and continued by his relatives and students, has been gathering for a month Bulgarian and English artists to create together a performance on a play by Shakespeare . The award for a young artist in the field of performing arts, which allows the selected person to participate in the next edition of the project in Patalenitsa, was awarded to Daria Dimitrova from NATFA, who plays the role of Henia in ” Suitcase packers”.

The festival would not be possible without all who support it. Among them are The Ministry of Culture, The Municipality of Stara Zagora, The “Geo Milev” Drama Theater Stara Zagora, The Puppet Theater Stara Zagora, The Regional Library “Zahari Kniazheski”. The partners of the event are UBB, Overgas, PFC “Beroe”, Sopharma AD, Zagorka, Alexandra Estate, Art Factors Ltd., Premier Studio, Anomay Marketing Agency, Net Advance, LaRocque and Unigato hotels, ZORA stores, “5th Avenue” club and Kaufland stores. Media partners of the event are Darik Radio, LoveTheater.bg, AzCheta. com, Dolap.bg and TV Stara Zagora .