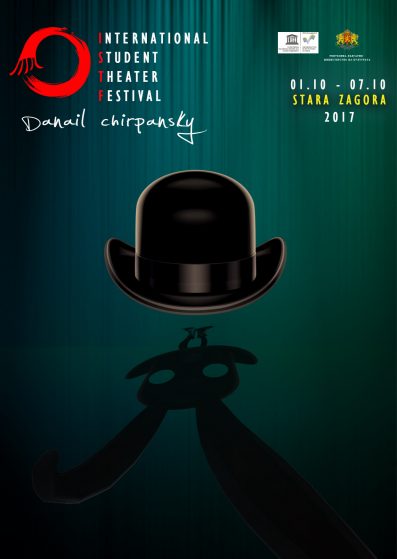 “We did it!”, we said at last. None of us believed that International Student Theatre Festival Danail Chirpanski would come true in this amazing way. And not because of the fantastic performances, the big names and institutions who supported us, but because of its people… because of Dani! It was as if we had borrowed his whole soul and it had come alive for a full week during the festival in Stara Zagora.

The project’s history is as dynamic as the days of the festival. As if magically, we were awarded UNESCO funding as part of the International Fund for the Promotion of Culture. Our project was one of eight chosen amongst 814 across the world. We would like to thank all our partners, without who we would not have been able to do this.

We soon realised that the festival was around the corner. Its slogan was born as a joke – while we were looking for advertising for our videos, made by Premier Studios. Let’s Drama! And this is how it went – drama, drama, and more drama – we obviously coded our fate within these words.

Coming together in Stara Zagora, we realized how much work we had done, but also how many things we hadn’t thought about and saw others that we could have never predicted, because they were so unbelievable that even years of festival production experience would have not been enough to help us foresee them.

On the opening night – 1st October – Dani’s whole Drama class gathered from Bulgaria and across the world, arriving early in the morning so they could rehearse their graduating performance “Bai Balcho Remembers”. They spent the day rehearsing, while Dressing Room 4 (also known as “the office”), had turned into a madhouse. That day we spent worrying if all the groups would find their way from the airport, if all their set and props would arrive on time… worrying until we heard the song from the performance of Dani’s class. Our hearts trembled and we stopped, just for a second, to remember the real reason why we were making this festival happen.

That evening, the theatre was full! We could not fit everyone who wanted to see the play and none of our team and staff could watch it either! After the play, the theatre stayed full for the opening ceremony. From this moment onwards, the magic became real! It turned out that until that moment many of our participants hadn’t realised the real cause behind our festival. But when they heard about our history and mission, the students and professors from all those amazing academies, became part of our hearts, our team, our emotions. They sang our songs with us, they hugged us… And this carried on till the very end.

The judges were our biggest pride – Kama Ginkas, Deyan Dukovski, and Maya Pramatarova! We were over the moon when we found out they had agreed to participate in the festival for its full duration. “We have never attended such an exciting festival”, they all shared at the end. This meant a lot for us, really… and we were incredibly grateful for their support!

“That’s all nice and well”, the sceptics amongst you would say, “but did anyone come to see the performances?”. The short answer to this would be “Yes” and the full one “Gosh, we had to be at the doors every day, securing the places for actors and participants, because there was not an empty seat in the theatre!”

As if within a single day, all performances, workshops, concerts, and parties came to an end.

It was time for the closing night. Even before the ceremony, we could see the finish line and we started asking ourselves “How would we live without this?”

After all the songs, awards, and happy tears, there wasn’t a single soul at the festival who had not touched our hearts; we believe we found our place in theirs too.

With the support of: