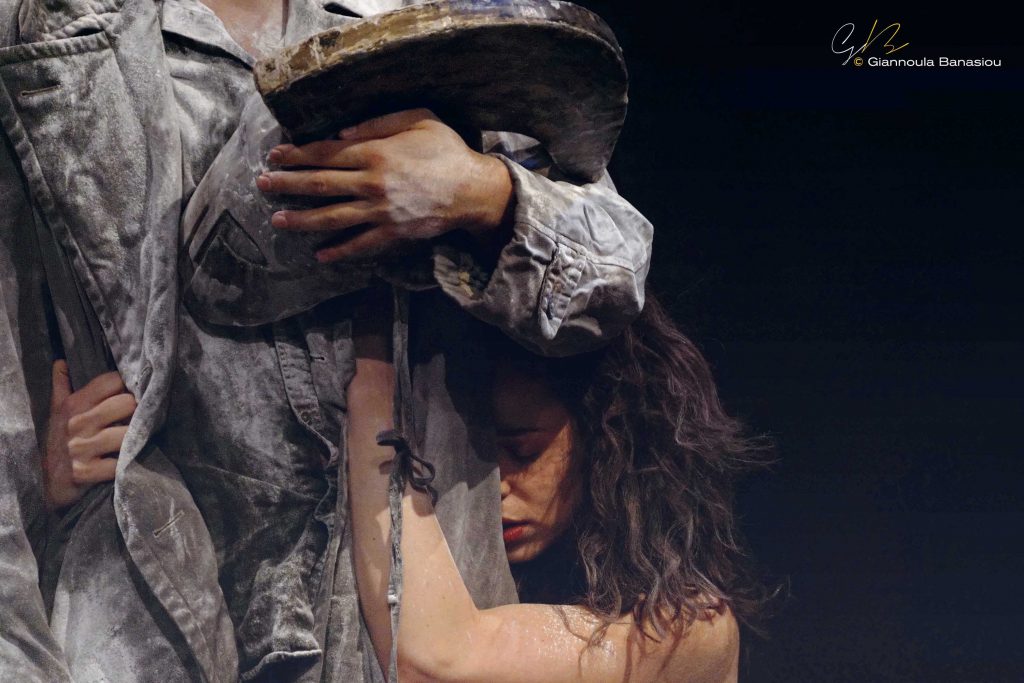 It all begun when the students were given a simple task to perform sketches based on poem’s verses.

Poets use the words as an expression. How are you going to express yourselves?

While watching the young actors working on their fragments, the professor’s attention was drawn to one of the sketches. The character played by his pupil reminded him of Clytemnestra waiting for her husband Agamemnon. From that moment all students found common ground and started working on the same base – Agamemnon by Aeschylus. The performance was an improvisation and was acted out through the poem’s verses. It took over a year to build it piece by piece and every time something was added or removed. The play was alive, it was always different and new. But the main topic always remained the theme about the choice.

The play starts with an old man with a bouzouki in the role of The Choir. He is on stage all the time observing, commenting, joining others’ dialogue and sharing his wisdom with them jokingly, perhaps because of their youth and stubbornness. And who are they? It’s a group of young men and women filled with raging emotions who burst into the stage with a sudden and shocking door opening and start a storm of words, voices and actions.
Is Iphigenia’s sacrifice really necessary? Is Agamemnon’s murder a crime? What is the price for happiness and success? Does something as too much happiness even exist and if so, should it be punished? All these questions lead to a conflict in the group of friends on stage. Girls put on veils and boys are mocking them. Some want to devote themselves entirely to art, while others demand to remain down-to-earth. In all acts echo the words of Aeschylus’ poem and Agamemnon’s story is tangled with the present, with the youthful shirts and with the short dresses in all colors. Did you know that the concept of the red carpet comes from the red garments Clytemnestra orders to be laid out on the way of Agamemnon so he can walk on them? A red carpet is also on the stage here. Red as the blood in the bucket that a young girl in a white dress carries No one knows whether the bucket is empty or there is something inside. In the end she triumphantly puts it down and suddenly steps into it. Again, and again, and again until she is covered in blood. A true Clytemnestra, just after she killed Agamemnon and in a white dress ready to marry Aegisthus.
National Theater of Greece Drama School’s Agamemnon is one of these plays that can make you cry and laugh and think and compare, a little bit of everything. Interesting is the students’ decision not to use subtitles and to perform in Greek for Bulgarian, Spanish, Georgian, Russian and English audience. I had never seen a performance like this before and I had my doubts in the beginning but truth to be told – it was fascinating.