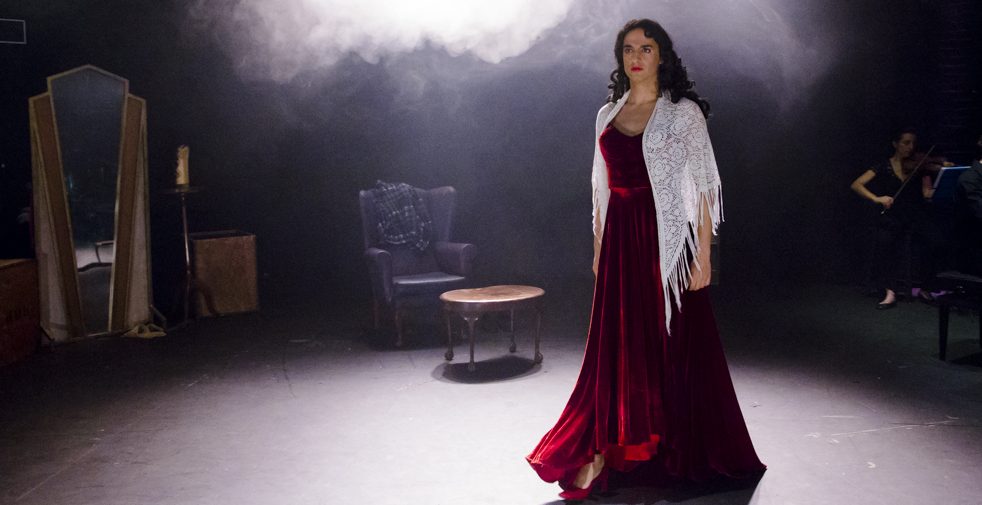 Today we will tell you the story of a very special theatrical, who took a spectacular part in both of the editions of the festival by that time. If you know Alejandro Postigo, then, surely, there is no way you could forget him. He was one of the participants in the competitive programme of the first edition of ISTF, representing The Royal Central School of Speech and Drama in England, United Kingdom. In the monospectacle “Copla” he was reincarnated as the drag artist La Gitana (The Gypsy) and took home the prize for masterful command of the musical genre and personal approach to it. Why he is so special you can also read from the story of one of the members of the technical team in 2017:

“The hall in the Youth Centre proved exceptionally poor for Alejandro’s imagination. We are used to making something from nothing, but I can only imagine what a nightmare for Alejandro’s senses the hall and stage, which haven’t been renovated since the 80s, must have been. Teodora Lazarova, however, poured all of her resources and we brought in decors from the Drama Theatre and the State Opera. All of the lighting came from the Drama Theatre in Plovdiv. Our team was fantastic. Along with all of this, Tedi was busy with the other performances. And I was busy translating for everyone. In my entire life, I have never lied so much in so little time. I lied to Alejandro that we still don’t have a hall. I lied to Teodora that Alejandro was doing okay, so that she doesn’t go crazy as well. I lied to the manager of the Youth House that we would not bring down the whole building with all the lighting, decor and people.

However, on the night before the performance, when Alejandro saw that the spectacle would be finished, he did not expect that incredible intimacy, which filled that poor theatrical space and, I think, that it was exactly what his La Gitana needed and he spread his wings. And with that, the public also went wild. That hall, despite its many shortcomings, carries the energy of generations of young people as well as that of Dani.”

And now, see the contrast for yourself: In 2019, Alejandro was also a lecturer and during the second edition of ISTF – from the moment of his arrival in Stara Zagora to the last second before his appearance on stage, Alejandro did not have 4 days but 4…hours. There was this saying, that if you go to bed so late and get up so early, you’ll start meeing yourself in the halls. That’s why we are super happy that we met our favourite Alejandro on stage again!

P.S: Alejandro, we know where the wig is!